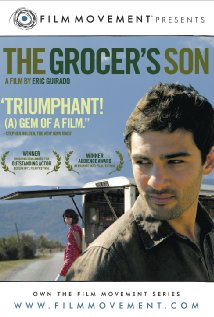 In which we look at the corner shop in the movies….
In the interests of academic research and a more interesting blogsite, we have recently taken to watching the odd DVD in the back room. Not any old DVD, we’ll have you know: there are strict criteria. The film must be about shop life. We wanted to know how the corner shopkeeper is being portrayed out there, and set the record straight if necessary. This exercise is also, of course, a very good way of whiling a quiet bank holiday afternoon….
Synopsis:The Grocer’s Son (2007) is a cracking little French movie, somewhere between family drama and romantic comedy. Yes, it has subtitles. It tells the story of Antoine (played laconically by Nicolas Cazale), a bit of a bum, who moves back home from Paris to Provence to run his family’s mobile grocery business after his father has a heart attack. His motivation is a bit sus, as it turns out: he brings with him the lovely Claire (Clotilde Hesme), conspicuously to help her with her studies, although it is apparent to the viewer that he’s really into her. The drama of the piece stems from the the tense relationships within the Sforza famille: Antoine is no prodigal son. The dynamics within the family are well observed, and there are moments of genuine pain in the film. But the piece is saved by the blossoming romance between Antoine and Claire, and Antoine’s struggle to build a working relationship with his father’s round of crusty and irrascible pensioners. Highlights? Liliane Rovere is wonderful in the role of Lucienne, one of Antoine’s battier customers. And the Provencale countryside also gets close to stealing the show: pure scenery porn.
Real shop cred: Well apart from the fact that this particular shop is set against a backdrop of bucolic perfection (and most corner shops, like aren’t), we have to give it 8/10 on the cred-ometer. The portrayal of the subtle tug of war that is shopkeeper v. customer relations, the importance of the shopkeeper to the community, the effects that running a shop can have on family life and the joy that it can bring – these are all well done. The overall message of the film is that there is indeed an art to running a shop, and that shoplife is a state of mind. This cornershop keeper approves.
Buy, rent, cadge or avoid? One to cadge. Although we bought, because it was cheap enough, and are jolly glad that we did. It is not that we would want to watch it again and again, but it is a classy and entertaining piece, one which we will be happy to pass around (have you noticed that there are some films which one would never dream of lending to anyone, and others which seem to be created just for sharing?). It is always good to have a few arty foreign films on your DVD shelves anyway, as it ups your viewing credibility, and mollifies the damning effects of that Buffy boxset….